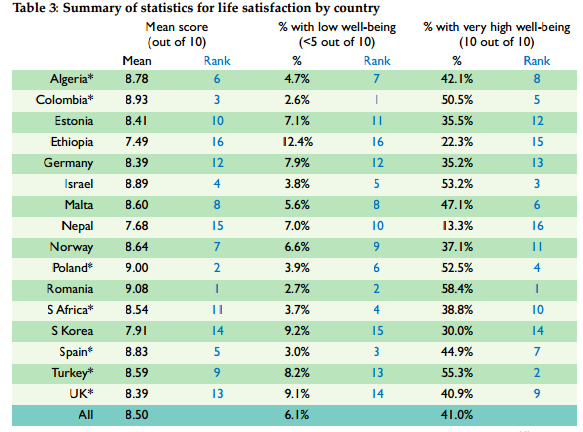 Eight-year-olds in England are less happy than those in Romania, Poland and Algeria, research suggests

In an international survey of 16 countries, children in England were ranked 13 for life satisfaction in – with only South Korea, Nepal and Ethiopia faring worse.

The findings are the latest to come from the Children’s Worlds research project, which asked young people across the world about their lives and thoughts on their wellbeing.

In England, the survey questioned 990 eight-year-old pupils about their family and home life, friendships, money and possessions, school life, local area, use of their time, personal wellbeing, views on children’s rights, and their overall happiness. The results are shown below:

Children surveyed in England also ranked low for their satisfaction with family life, with Catalonia in Spain coming top and Nepal bottom.

More than two-thirds of English children said they felt safe at home.

In terms of friends, England came mid-table when young people were asked if they were satisfied with their relationships.

England did not rank any higher than eighth place for any of the questions.

Asked about bullying at school, a fifth of children in England said they had been hit by fellow pupils more than three times in the past month, compared with almost a quarter in Estonia and 6 per cent in South Korea.

Regarding issues around how young people see themselves, children in England came in the bottom five when asked about their appearance and body. Colombia and Romania came top.

Gwyther Rees, of the Social Policy Research Unit at the University of York, which carried out the research in England, said: “There are some quite troubling messages from England and the picture is quite similar to what we found with older age groups.

“Children are happy at home and with friends but less happy at school where there seems to be an issue around bullying and being left out.”

Simon Sommer, head of research at the Jacobs Foundation, which funded the work, said the project was “groundbreaking”, revealing information from the eight-year-olds’ own perspectives.

He added: “The Jacobs Foundation continues to support Children’s Worlds, because we are convinced that it will deliver unique information valuable for everyone who is interested in understanding and improving the lives of children and youth.”

The spokesman added: “We are also promoting greater use of counselling in schools, improving teaching about mental health, and supporting joint working between mental health services and schools. This will ensure children can thrive both inside and out the classroom.”