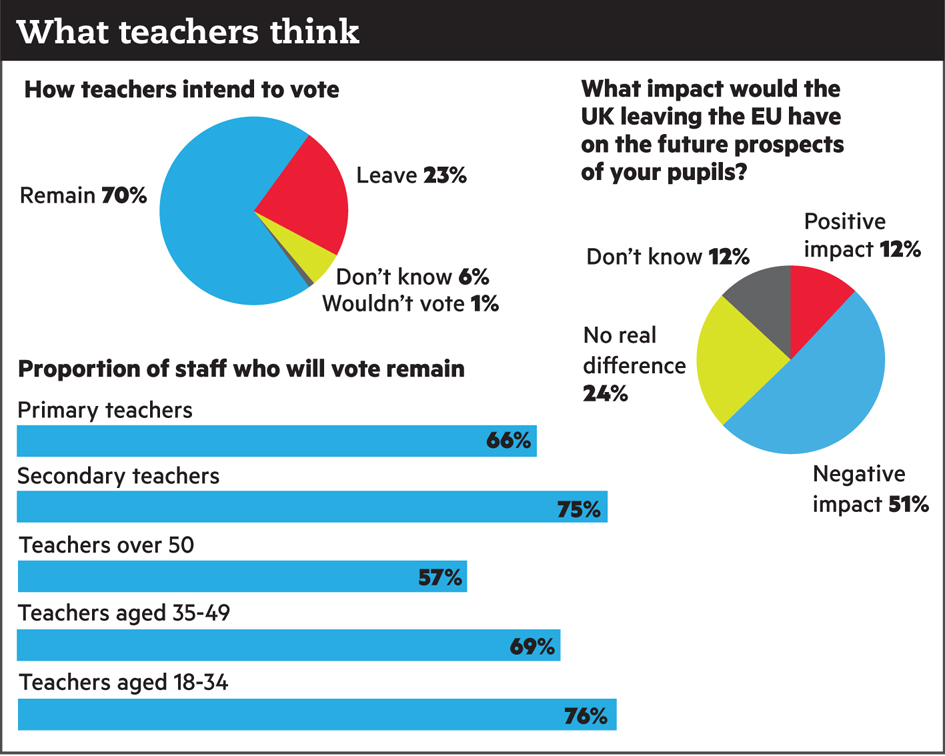 Seven out of 10 UK teachers want to stay in the European Union and more than half think that a Brexit would damage their pupils’ futures, according to an exclusive YouGov poll for TES.

With Thursday’s referendum less than a week away, the survey reveals that just 6 per cent of teachers believe education would benefit from a leave vote and 27 per cent think it would “get worse” as a result.

“We know that it is only with a strong economy that we can have strong public services,” she writes in a joint article with former Labour schools minister and TES Global chief education adviser Lord Knight. “A vote to leave would mean less funding for your local school and put children’s education at risk.”

Mary Bousted, general secretary of the ATL teaching union, said: “Teachers have the privilege to work with many young people from very different backgrounds so they can see beyond the stereotypes.

Younger teachers and those in secondaries are more likely to back EU membership than their older colleagues and those in primaries, according to the survey of a representative sample of more than 750 teachers.

The poll also reveals significant regional differences. In London, 30 per cent of teachers back a leave vote, compared with 21 per cent in the rest of Southern England, 19 per cent in Scotland and 23 per cent across the UK.

Russell Hobby, general secretary of the NAHT headteachers’ union, said that he expected teachers to back remain. “They look at children in their schools and look at the futures they would face, and many seem to believe there would be more opportunities for the children if they remain in,” he said.

A straw poll at the NAHT’s annual conference last month found that nearly threequarters of delegates wished to stay in the EU. But at the Easter conference of the NUT teaching union, some members called for teachers to vote to leave “fortress Europe”, as they said this would make the UK more free to open up its borders and welcome refugees in.

NUT delegates voted to take a neutral stance on the referendum after the motion – accusing the EU of “vicious racism” – was watered down by the union’s executive.