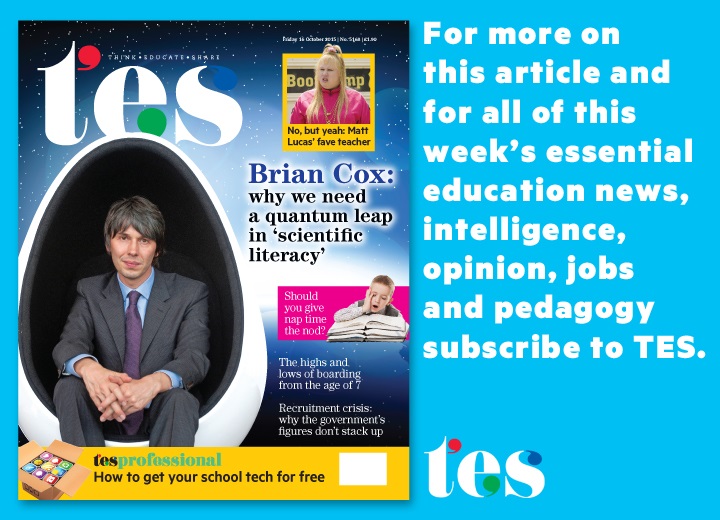 This is an edited version of an article from the 16 October edition of TES. To read the full article and to subscribe to TES click here.

Professor Brian Cox has used his skills as an academic and a presenter to make science accessible and popular for a primetime television audience. Now he wants the UK to go a step further and become “scientifically literate”. And he believes it is schools that can make the difference.

Professor Cox set out his recipe for improving science education in an exclusive TES interview. He argued that for students to develop a deeper understanding of the sciences they should study them separately, and he wanted greater trust placed in teachers. He also spoke of his concerns about the assessment of practical science work.

Top of his checklist is a shift back to the individual science GCSEs taken by a declining proportion of pupils as combined science becomes more popular. He believes that for people to gain a deeper understanding of science, the subjects of biology, chemistry and physics should be studied separately up to the age of 16.

Not only would this better prepare young people for further scientific study, Professor Cox said, but it would also equip a generation with the tools necessary to understand the big policy decisions the public will face across many different areas in the future.

“I think there’s some evidence that students do better at science when they do all the subjects separately,” the University of Manchester professor of particle physics explained. “There are two things here: one is that we want to produce the scientists and engineers of tomorrow, so we need to make sure students are inspired and have the right skills to go on and do A-levels and go on to universities, or go and do an apprenticeship.

“But there’s also a desire to make a generally scientifically literate population.”

Professor Cox added that ministers should trust teachers more. “One thing I would say to government is to lean a little bit more in favour of trusting the judgement of teachers, because then you will elevate the profession,” he said.