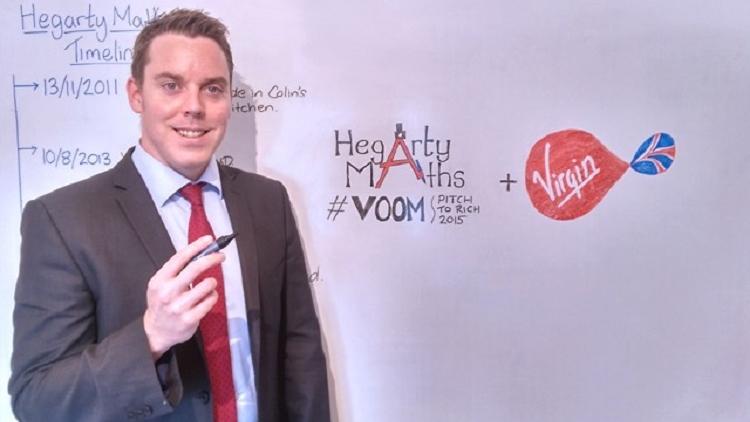 Colin Hegarty, from Preston Manor School in Wembley, north-west London, has been shortlisted for the Global Teacher Prize, which aims to recognise an “exceptional teacher who has made an outstanding contribution to the profession”.

Mr Hegarty reached the final 10 after creating more than 1,000 online maths videos that have been viewed almost 5 million times. He and the other nine finalists for the $1 million prize, which is run by the Varkey Foundation, the charitable arm of the Gems education group, have been narrowed down from 8,000 nominees.

He will compete with teachers from all over the world including Pakistan, Kenya, Japan and the US.

Mr Hegarty’s videos are part of a “flipped classroom” approach in which pupils familiarise themselves with subject content at home, then use lessons to discuss and extend what they have learned.

He started creating online teaching aids to help one of his students, who had to move abroad to care for his father but wanted to continue his studies. Since then he has created 1,500 videos. Last year Mr Hegarty received the UK Teacher of the Year Award from prime minister David Cameron.

Mr Hegarty, who grew up in a one-bedroom London council flat and became the first person in his family to attend university when he gained a place at Oxford, believes there is no such thing as being “bad at maths” and that all pupils can succeed with hard work and good teaching and support.

Reaching the final 10 was “a total shock, but a lovely shock”, he told TES.

“When I found out I was in the top 50, I googled the other people [on the longlist] and thought, oh my God, they’re amazing.”

Being in the top 10 was “a pretty special thing,” he said, adding that since becoming a finalist he has been in contact with the other nine contenders. “I feel privileged to know these people. They’re sharing some incredible stories and they have some fantastic ideas.”

From primary to A level

Mr Hegarty said that if he won the $1 million prize, he would use the money to expand his programme of teaching resources and put it on a sustainable footing. “At the moment, it’s run from my kitchen,” he said. “I’d like to formalise it and it [the prize] would help with that in a big way.” The resources could also be extended to cover A-level content and more resources for primary school pupils could be added.

Last year Mr Hegarty won £50,000 for his website, after pitching his business case to Richard Branson in a “Pitch to Rich” contest (pictured above).

Sunny Varkey, founder of the Varkey Foundation, said: “I want to congratulate Colin Hegarty for being selected as a top 10 finalist from such a huge number of talented and dedicated teachers.

“I hope his story will inspire those looking to enter the teaching profession and also shine a powerful spotlight on the incredible work teachers do all over the UK and throughout the world every day.”

The other finalists include Robin Chaurasiya, who founded and teaches at Kranti, a school for marginalised girls from Mumbai’s red-light areas, and Richard Johnson, a science teacher who helped to set up the first Australian school science laboratory specifically designed for young children.

The award, described as the “Nobel prize for teaching”, was launched in 2014 and is supported by UN secretary-general Ban Ki-Moon and Microsoft co-founder Bill Gates.

The winner will receive the money in equal instalments over 10 years, and will be given financial counselling. A condition of winning the prize is that the winner remains as a classroom teacher for at least five years.

Last year’s winner was Nancie Atwell, a “pioneering” English literature teacher from the US whose approach lets students choose the subjects they write about and the books they read. As a result, her pupils read four times as many books as the national average.

The winner will be announced at the Global Education and Skills Forum in Dubai on 13 March.