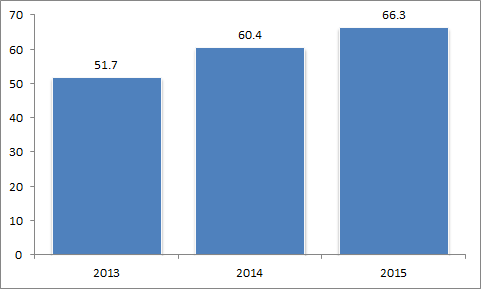 There has been a sharp rise in the number of five-year-olds performing well at school according to official statistics out today.

Two thirds of children reached a good level of development at the end of reception in 2015, compared to 60 per cent in the previous year,.

Children are rated as having achieved a “good” level if they hit expectations in 12 of the 17 early years foundation stage profile (EYFSP) assessments which teachers carry out. These include being able to count to 20 and read simple sentences.

% of children reaching a good level of development

% of girls and boys reaching good level of development 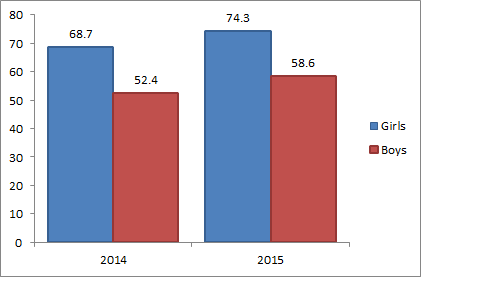 Neil Leitch, chief executive of the Pre-School Learning Alliance, said: “While we are pleased to see that the gap between boys and girls is continuing to narrow, the difference in outcomes remains significant and so clearly there is more work to be done to tackle this trend.

“At a time when so much focus is on the delivery of ‘childcare’, these results are a timely reminder of the importance of early education, and the provision of quality learning opportunities that support young children.”

The early years foundation stage profile was changed in 2013. Previously teachers had to rate children on a nine-point scale in 13 areas.

Under the previous system 64 per cent of children were at a good level of development in 2012.

Education and Childcare Minister, Sam Gyimah, said: “We know that the first few years of a child’s life are vital in terms of how well they go on to do at school and beyond.

“It is great news that more children than ever before are achieving the expected level of development in the early years, because parents should be confident that while their children are out of their care, they’re not only happy and having fun, but at the same time developing important skills – building confidence with numbers and letters – to ensure they fulfil their potential.”